YAIR LEV takes up the challenge and makes an attempt to characterize the differences between reportage and documentary film.

One of the most difficult issues to untangle in the making of documentary cinema is the issue of its limits: how does it differ from reportage? When can we determine with any certainty that we are watching a movie and not a news report, interesting or exciting as that may be? The difficulty of creating clear-cut definitions in the fields of aesthetics and literary criticism is well known, although intuitively the differences are often clear. 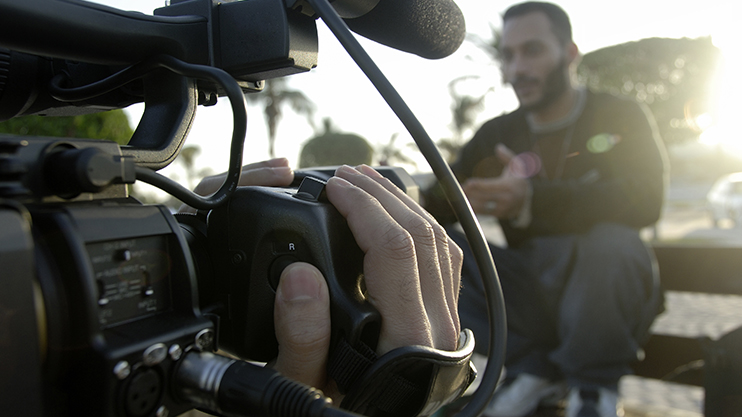 Essentially, there are two types of reportage: ‘news reports’, which deliver “objective” coverage of events, and the other type of reports I will refer to here under the generic umbrella of ‘colour reports’. These reports deal with a variety of phenomena that exist on the fringe of a news event or are generated by them, for example the reports in weekly news magazines. Other times they are more “freestyle” and less crucial, such as reports about migrating birds in the Hula Valley or new Internet sites. A sub-genre of the ‘colour reports’ is the ‘personal report’, usually longer, carried out by a well-known investigative journalist, reporting from his personal viewpoint. A genre that is also called ‘New-Journalism’, and aims to expose an aspect of life. This sub-genre, the ‘personal report’, crystallizes the difference between the report and the documentary film. ‘News reports’ and ‘colour reports’ demand utmost “objectivity”, whereas in the ‘Personal’ report the reporter’s subjectivity is inevitable. As we shall see however, it does not transgress the border into the realm of the documentary cinema.

What is that realm then and which border are we talking about? In discussing reportage, I mentioned three key issues: journalism, information and “objectivity”. Directors of documentary cinema often commit themselves to doing quite the reverse. Rather than striving for “objectivity” they look for the subjective point of view from which they can process the material into a personal statement on the reality. The information derived from this reality is artistically moulded into a cinematic drama. This does not imply that the documentary director must take part in the drama (as is common these days in the genre of personal documentaries). However, the directors’ fingerprint, their style and especially their categorical choice – the intentional selection of the information and material they use must be present in the movie.

As one can distinguish between written journalism (personal, unique, inspiring and eloquent as it may be) and prose (based as it may be on documentary materials) and make a further distinction between prose and poetry, in a similar way we can distinguish between the report / reportage that belongs in the world of journalism and the dramatic, the narrative film, or, in some less common but clearer examples, the poetic film.

The question remains: what do we mean when we define a phenomenon as ‘drama’? At the heart of drama is a human experience we can empathize with, that is delivered to the audience through its hero(es). That is to say the documentary film centres on a protagonist going through some human process in the narrative – the axis of the film. Paving a dramatic, effective, communicative, exciting and thought provoking narrative course is an art that demands that the rules of dramaturgy be challenged: defining the protagonists, and their relation with the antagonistic forces; creating and concluding dramatic gaps to stimulate interest and thrill the audience.

In this respect the documentary film is not different from the fiction film with the exception that in fiction it is easier to define the narrative, since it is often based on filmed actions performed by the characters to advance the plot. However, the thought of a protagonist acting under the structure of a dramatic narrative is what defines the documentary project. It exists in every documentary film, whether the dramatic narrative is revealed to us through “talking heads” having conversations about past events, or whether the narrative is a diachronic following of the events as they unfold.

Another important element distinguishing cinema from journalistic report is the use of cinematic language. This entails the use of the entire range of the particular means of communication available to the cinema director. The photographic concept: the visual translation of the drama occurring in the film (choice of frame, light, camera positioning, etc.). The time-space definition within which the narrative will unfold: whereas in reportage, one is freer to add whatever information is required. In the documentary one might very well need to shoot special visuals, just so that one does not have to return to a scene that has already been completed.

The issue of editing: finding an internal rhythm and tempo for the film through the style of editing and other means. The editing process is crucial to the documentary, because, in addition to harmonizing the various artistic elements, it in effect creates the script for the film.

These are just part of the spectrum of the means of communication available to the director attempting to tell his or her story – that does not mean an unreasoned and overly demonstrative use of cinematic language. It also does not imply that reports necessarily are sloppily shot or edited, but rather that the use of cinematic language needs to be modest and more practical, partly because “over-cinematizing” can shade the report and lessen its authenticity. Now we can get back to the object in question, especially the sub-genre ‘personal reports’, to analyse whether the parameters essential to drama exist in them. Does the director use cinematic speech? Is there a process that the protagonist undergoes within a dramatic narrative structure? If the answer is ‘no’, then it is most likely a report, even if the makers categorize the programme as film.

The previously mentioned poetic film correlates better with poetry than prose. In these films, cinematic language takes centre stage, the subjectivity inherent to it is emphasized and the use of reality material is often “plastic”, abstract and suggestive, like the futuristic Berlin, a Symphony of a City by Walter Rutman or Orshalem by Dan Geva. These characteristics enable a clear distinction between this genre of lyrical documentary and the various types of reportage.

The principle of taking a stance and the subjectivity in documentary cinema need to be qualified by an ironclad rule that is no less significant: a manipulation of reality for dramatic purposes shall never be a manipulation of the truth. A director may ask a character in his/her film to reconstruct an event or repeat a certain sentence; in the same way, the director may eventually decide what to cut and what to keep in the film. But the director must not misrepresent, distort information or create appearances that do not exist in reality. In other words the documentarist has a moral obligation: to direct, not to lie.

Reminiscences of a revolution

HOW I SAW IT