From the public space of the street to the private environs of homes, Iranians are photographed by the director. Through the dialogue created by the photo session and the way they pose, the characters subtly reveal themselves and a larger question emerges: How do Iranians see the current political regime? The film sketches a portrait of a society before, during and after the elections, a short period of time during which change seemed possible …

Salaam Isfahan (Good Morning Isfhahan) is Sanaz Azari’s poetic documentary set in the Iranian city of Isfahan, during the controversial general elections of 2009. The film consists of spontaneous conversations with a diverse and randomly selected group of subjects who have agreed to be photographed by Azari. The naturally lilting conversations occur during the photo shoot and seem completely unprompted with a minimal of set-up. Azari sets up her camera in outdoor, public areas and offers to take photographs of passers-by. Some refuse and keep walking, others stop and oblige, becoming part of the film. The conversations span a spectrum of topics.

However, the timing of the film, beginning just prior to the elections and ending just after the results are declared, imbues the film with a political undercurrent. While eschewing overt political comment, the film certainly alludes to the general political climate that exists at the time and, through its choice of subjects and conversations, makes a reserved comment about the political process in Iran. While elections are held more frequently in Iran than other Middle Eastern countries, the Guardian Council, a body of clerics, vets each candidate. 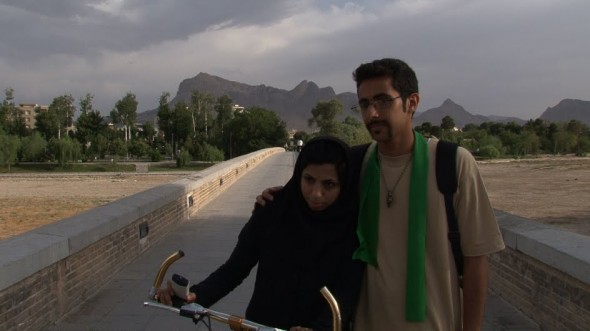 Four candidates contested the 2009 general elections but the real battle was between the incumbent President Mahmoud Ahmadinejad and the reformist candidate, Mir Hossein Moussavi. Pre-election campaigning was marred by violent clashes between the supporters of Moussavi and the state security forces and there were reports of anti-government protestors being beaten to death. On Election Day, a historically large voter turnout was recorded as Moussavi was widely supported by the youth and there was a real opportunity for change. The election results therefore come as a surprise to many of the participants, in the film. The hard-line incumbent wins by a large majority, angering those who witnessed the polls. There is a suggestion of inevitability about the results; the insinuation of election fraud.

Azari’s subjects however, don’t make heated comments or impassioned speeches. Instead there is a dignified conversation with a young man who expresses his disgust about the polls in calm tones while his female companion looks on from her bicycle. Azari takes his photo and they leave to attend a public rally protesting the results. Azari’s gentle approach to the topic means that instead of forcing responses from her subjects, she often uses silence as a tool to elicit a deeper, thoughtful response. 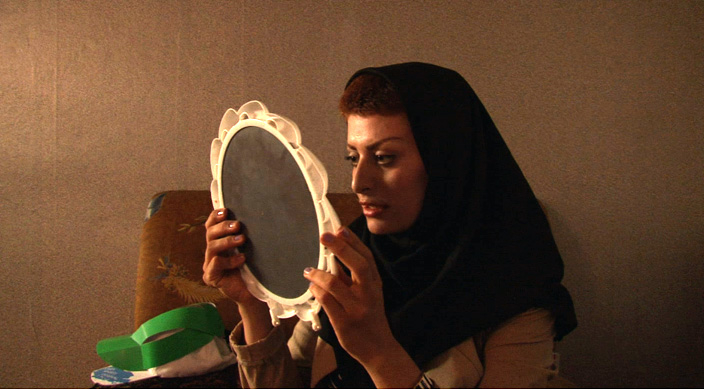 Subjects reveal themselves unconsciously as they arrange themselves for the camera; she captures a variety of moods by allowing the subjects time and space to make themselves comfortable. At the most, her questions are broad, ‘where are you going?’ or ‘do you know a poem?’ As they start to answer, growing confidence relaxes them enough to make stronger statements about life in Iran. There is a certain poignancy in these interactions, fleeting as they are; they are moments during which the subjects unhesitatingly entrust the filmmaker with their secrets. Azari treats her subjects with great dignity and the narrative works on several levels. While capturing the political climate is an important element of the film, it is just as much about the subjects themselves as individual characters leading lives of intrinsic significance.

Thus, individuals talk about their favourite type of music, frustrations, hopes, concerns and everyday life. A young woman cheekily demonstrates the latest trends in headscarves, labelling some as ‘glum’ while others as ‘fashionable.’ A group of young men, true to their image, screech to a halt in their car, swagger to the camera and quickly leave to ‘smoke joints in the park.’ The incidental quality of the conversations is extremely endearing, where no obvious political statement is being made, yet the audience glimpses a slice of life within a society, through images that are not heavily mediated by global news networks and international rhetoric.

The film has a palpable mood of anticipation – once the upcoming election is mentioned in an early interaction, events seem to build towards a climax. A sense of suspense imbues the film and when Election Day dawns, Azari films families who have just cast their votes. There is a feeling of history being captured as the whole town awaits news of the election results. As night falls, the camera looks upon the brightly lit town from the dark, surrounding hills and records the burst of sound from the rival camps that signals the results. Shouts from rival camps ring out and as the camera slowly pans around the hill, the cries grow louder and gradually morph into party music, releasing the built-up tension.

Beautifully filmed, long duration shots are used to observe exchanges. At a beauty salon, elegant clients chat with the beautician making them up about their dissatisfaction with the strict moral rules that condemn expressions of sexuality. The camera unobtrusively observes the scenario as the women vent their frustration, without visually interrupting the flow of the conversation. Masterful editing is used to achieve a patiently even pace.

The filming process is externalised to a degree – initial conversations between the director and the subjects, and pauses while the characters pose for the camera that would be edited out in most documentaries are retained, giving the film an authentic texture. Ambient sound too seem to have been kept in – noisy passing traffic, falling rain and, in the final powerful scene, several minutes of collective cries of ‘Allah hu Akbar’ resonate from the rooftops as night falls over the city. Salaam Isfahan celebrates the ordinary lives of people living in turbulent times. While the world speculates about security threats and debates placing sanctions on Iran, life goes on.