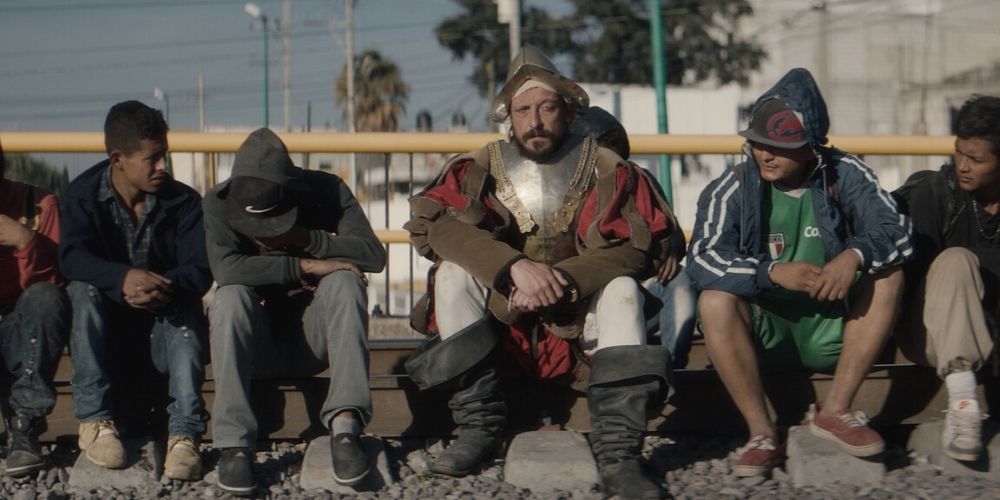 COLONIALISM: Almost 500 years after the Spanish Conquest, a ghostly figure merges history and the present reflecting on the legacy of colonialism.

«Something is rotten in the state of Denmark», Shakespeare wrote in his famous play Hamlet. A phrase that survives—and will survive—through time, and that is in force for countless casuistries. Likewise: «there is something rotten in The United Mexican States». This is the main message that emerges from the latest film, by the Mexican director, producer, editor and screenwriter Rodrigo Reyes, entitled 499.

It is not his first time as a film director. In 2012 he directed the documentary Memorias del Futuro and he continued his career with Purgatorio: Viaje al Corazón de la Frontera (2013), Lupe Under the Sun (2016) and also the two documentary shorts After the Raid (2019) and Abuelos (2020). His films have received the support and recognition of institutions such as Tribeca, Sundance, and the Mexican Institute of Cinematography. This time, he releases a documentary that comes to reaffirm a promising career as a filmmaker. In addition, Rodrigo Reyes brings a fresh, intimate, and critical view of his country’s issues, old wounds that still ooze.

Rodrigo Reyes has had the help of old fellows like Inti Cordera, founder of Maroma Producciones and director of the DocsMX Festival. There is also Alejandro Mejía. However, there are new incorporations to the crew as the film editors Andrea Chignoli y Daniel Chávez Ontiveros. It is also worth noting the work as a screenwriter — working hand in hand with Reyes — of Lorena Padilla who graduated in Audiovisual Arts at the University of Guadalajara and a master’s degree in Dramatic Writing at the Tisch School of the Arts in New York. Eduardo San Juan Breña is added to this whole group of talents, the Spanish ghost that accompanies us on this shocking journey — as it’s life itself — and who makes way to the all the actors of these stories of corruption, murder, and survival.

A ghost wakes up on a beach after a shipwreck. A temporary shipwreck, over five hundred years ago. What happened to his peers? Where is Hernán Cortés now? «Maybe I’m dead and this is purgatory,» the ghost says. Doomed to be a witness of past errors — and horrors — and forced to listen to the testimonies of …

The Walrus and the Whistleblower

Only the Devil Lives Without Hope