Thomas Balmès is an independent documentary director and producer whose films, often shot in remote locations, present new angles to noteworthy events, inviting us to question perspective and truth. Previous documentaries include Bosnia Hotel (about the Bosnian war from the point of view of Kenyan warriors), Maharadjah Burger (about mad-cow disease from the Indian viewpoint) and Christ Comes to the Papuans (about conversion to Christianity in Papua New Guinea). His last film, Babies, offered glimpses of childhood from around the world in countries such as Japan, Mongolia, Namibia, and the United States.

Balmès did most of the shooting on Happiness, sharing DP credit with Nina Bernfeld. He uses hypnotic images and deft, almost magical direction to capture a turning point in history. In 1999, King Jigme Wangchuck cautiously approved the use of televisions and the Internet in Bhutan, hoping it would benefit the “gross national happiness” of his country. Balmès documents the last days of life before the shift. In a remote village called Laya where there isn’t even electricity (yet) and told through the eyes of an eight-year-old monk named Peyangki, the seduction of technology takes root. Happiness is ultimately a meditation on change and a mirror for our relationship with modernization.

What stood out the most to me is the beauty of Happiness. It almost felt like a narrative, a fiction film, in the way it was shot. Can you talk a little about that?

My previous film Babies liberated me from the idea that documentary should have a specific form. Working on a non-verbal film, I do trust more than before in the possibility of telling a story with very little dialogue,  mainly through visuals, which is what I tried to do with this film. I think that documentaries suffer from cultural dogmatism of what should be done or not, unlike fiction. With this film I tried as much as I could to use the tools of fiction to tell a true story, with true characters and real situations. I do hate repeating myself and I find it quite exciting to search for new forms of cinematic writing. 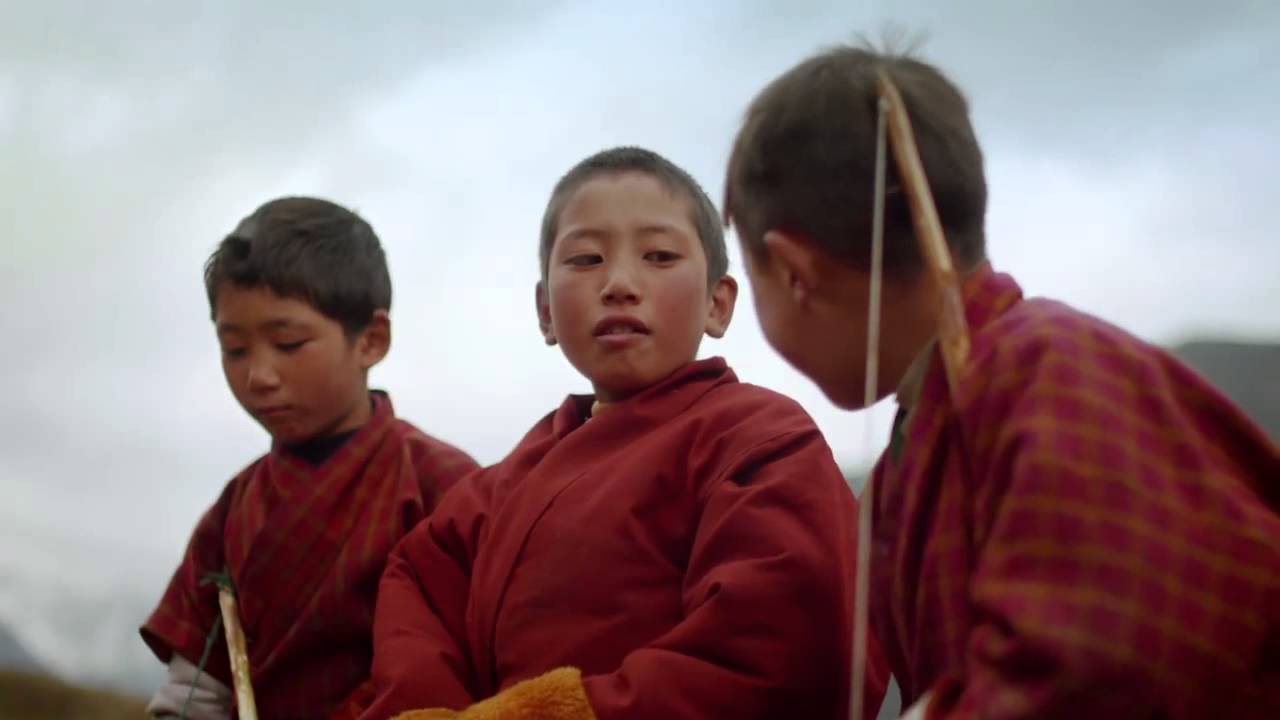 My initial objective was to make a film about how television would entirely transform a  society. That is how I ended up traveling to one of the most remote villages of Bhutan. My encounter with the Laya villagers and Peyangki was very visual, since I couldn’t understand a single word of their language. I had a feeling that Peyangki expressed so much by his simple presence. By telling a story with very little dialogue, using silence instead, and very little action, with careful cinematography, I wanted a formal treatment that is exactly the opposite of what has now become the common language for television. 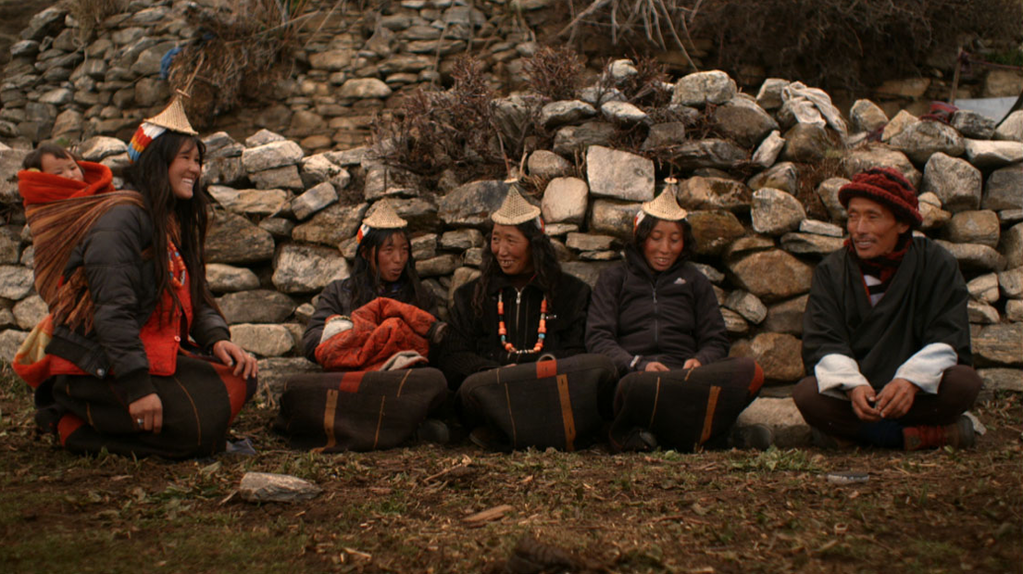 Can you talk more about the cinematography, how your use of lenses affected the way the story came across?

We only worked with prime lenses. We never used any zoom. We very close to the characters at all times, so no need for zoom. Sometimes I would tell the people involved, “Wait one moment before you continue your conversation because I need to either change position or change the lens.” This is something some directors would consider impossible to do, but I don’t have any problem with that as long as I do not feel it’s affecting the continuation of a conversation or the action. Depending on where you shoot, and what kind of culture the people have with the camera and with the concept of a film, it’s totally different.

“I wanted a formal treatment that is exactly the opposite of what has now become the common language for television.”
Thomas Balmès

How would you say it worked in Bhutan with their culture?

Apart from the film I have done in the States, I have only been shooting in cases where people don’t have television; don’t go to the movies; don’t have a culture of images. So they have a very neutral relationship with the camera. Culturally, they are not into the representation, into the worrying or concern about how they are going to be represented. 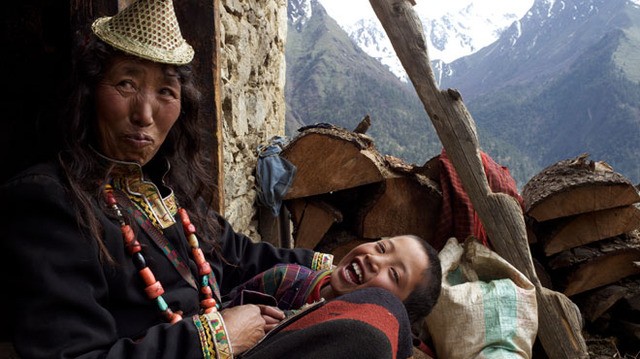 I also found your choice of music so interesting. It showed the playful side of your character.

This is something totally new for me. Until my film Babies, I never used any music. I was much more stylistically radical. Music was something I would never even consider. I did this film [Happiness] mainly for my kids. I wanted to make a film to try to explain to them why we don’t have television at home. Also I wanted this film to be seen by other kids. I also wanted the film to be very accessible. I would say music is a kind of compromise, to make the film more accessible and also stylistically in terms of language to get to something that is closer to fiction.
Yes, you play with the genre, and with expectation. The film itself, if you turned off the sound and didn’t know what it was about is just beautiful cinematographically. We don’t get this so much in documentary.

This is somewhat problematic. Some of the journalists I have spoken to are almost disturbed by the beauty of the images. Beyond beauty, I am trying to do a film that speaks visually and is meaningful. When I frame and compose, I am trying to make something watchable — shots and scenes and sequences, a few minutes without any dialogue that are purely visual. I am not thinking in terms of beauty. I am thinking about using the specificity of the medium of documentary with reality and images. So I am trying to get the least verbal as I can and to be able to develop the story mostly visually. And this is why I picked this character Peyangki because the very first time I met him he was super expressive, joyful and also sad. His character was quite complex.

The way you tell the story through his eyes, we almost saw the battle was already lost, that the seduction of television and the Internet had arrived.

You know I showed the film at IDFA and I brought my kids who are 7, 9 and 10. Not an easy audience. And they watched the film subtitled in English, and they don’t speak English. They were mesmerized without understanding any of the dialogue. So what I am really trying to do is have characters that are expressive. I am trying to film in a way where dialogue is minimal, almost an option.
I could not imagine a better way to end the film with the blank stares. I don’t want to give away too much, but it really affected me. Was this your intention from the beginning to have this kind of ending?

I knew very quickly I was not so interested in having conclusions about the consequences of television [in the village]. I needed to find a very specific way to stop the film – at the moment where people would almost expect it to start. Many people were keen on getting a scene showing the consequences of how people would react to the first images of TV, what would change in the village after that. I was not willing to do that because I think it would be very banal. I needed something visually strong.

From my own experience, I am fascinated by the eyes of my kids. We have no TV and sometimes we watch DVDs at home. They become like total zombies; you can’t speak to them or try to do anything if there is a screen with something going on. It is like they all have exactly the same face. I have always been interested in trying to find a way of showing that situation. And I felt this could be a good ending.
Would the great irony be if someone watches Happiness in Bhutan, say on the Internet?

What is interesting is that the film has already started to create some conversation and debate about the content of television in Bhutan and elsewhere. I am always surprised about how few films deal with this issue of television and screens, in general. I don’t think that there are that many things that have changed the world in the last 20 years like television has.